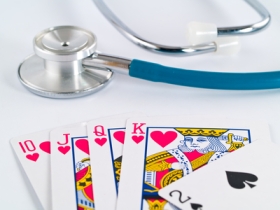 I love to play Duplicate Bridge.

The game is totally logical. It requires that you be able to count 4 suits of 13 cards each AND 10 points in each suit and after a few plays you can figure out where the rest of the cards lie.

Despite the fact that we were assured that we would have better health care, how can one logically say that when they are adding 30 million new patients to the healthcare rolls at the same time they are cutting payments to doctors. An immediate shortage of doctors now will be exacerbated by fewer new doctors entering the field. What is in it for them? Higher tuitions, higher malpractice premiums versus lower reimbursements from the insurance carriers. And those that say this will not happen are not being logical. They are being hopeful.

On top of the additional paperwork mandated by ACA, in 2013 there are additional new taxes. This is a partial list:

And by linking all of this to your tax return, they are going to feel free to use the Internal Revenue Service as the enforcer. Do you feel comfortable having another government agency that has recently acted in a Fascist manner dealing with your healthcare?

And for those who may object to the term Fascist, Webster’s Online Dictionary defines fascism as “a political philosophy, ….. that exalts nation …..above the individual and that stands for a centralized Autocratic government headed by a Dictatorial leader, severe economic and social regimentation, and forcible suppression of opposition.”

You WILL have the healthcare that the politicians mandate for you, but exclude themselves and their staffs.